Markets: A Year in Review

As with everyday life everywhere, the past 12 months in financial markets have been, to use one of the words of 2020, unprecedented.

Investors had reasons for optimism early in the period. President Trump and Chinese Vice Premier Liu He signed a ‘Phase 1’ trade deal in January, putting an end to prolonged and damaging trade war rhetoric. In the UK, the resounding victory of Prime Minister Johnson’s Conservative Party in the December 2019 general election facilitated the UK’s departure from the EU with a 12-month transition period and seemingly brought clarity after a long period of uncertainty in UK politics. On the financial front, 2019 proved to be a banner year for global stock markets amid abundant liquidity from the major central banks.

This period of relative serenity in global economies and financial markets then rapidly evaporated as the COVID-19 pandemic rapidly became a global crisis. The resultant government-imposed lockdowns of economies around the world, introduced in an effort to halt the global pandemic, prompted a rapid and brutal stock market sell-off in February and March that proved to be the fastest bear market in history. As societies effectively closed down for weeks on end in a bid to halt the contagion, economies suffered unparalleled declines. Amid concerns over rapidly escalating job losses and permanent scarring of the corporate sector, particularly those areas of the economy most hurt by the lockdowns such as travel and hospitality, governments responded with a historically unmatched level of fiscal stimulus and packages, including furlough schemes to preserve jobs. Central banks dovetailed with government rescue efforts by providing a torrent of liquidity.

This global policy largesse caused stock markets to rebound quickly. The resurgent US equity market was in the vanguard, powered by technology stocks, many of which were deemed ‘stay at home’ winners and whose business models were largely unaffected by lockdown. Healthcare and consumer discretionary stocks also experienced major gains globally. Energy, financial and real estate stocks suffered significant losses over the 12-month period.

Government and corporate bond markets enjoyed a strong 12 months amid interest rate cuts, severe risk aversion in the depths of the pandemic and major purchases of corporate bond assets by central banks, such as the US Federal Reserve.

In the UK, COVID-19 aside, Brexit dominated headlines and ensured that UK equities remained out of favour with investors, with the FTSE 100 index returning -20.6 per cent over the 12 months to 30 September 2020. Against this turbulent backdrop, the UK stock market was hit hard, with domestic-facing and ‘value’ stocks taking the brunt of the blow.

European equities, as measured by the MSCI Europe Index, fared better but still returned a disappointing -9.2 per cent in Euro terms. Emergency measures provided support for the rebound, but resurgent COVID-19 case numbers across the continent in early September, provoked investor concern about the strength and durability of the nascent economic recovery.

US equities topped the global leaderboard, with US large-cap technology stocks lifting indices higher and ensuring a remarkable recovery for the overall US market at the headline level. The S&P 500 Index returned 13.0 per cent over the year, in US dollar terms (for context, the MSCI World index returned 8.5 per cent in US dollar terms). But these figures belie underlying disparities at the stock level and what was actually very narrow market leadership.

Emerging market equities achieved solid gains over the year, with the MSCI Emerging Markets Index returning 8.1 per cent in US dollar terms. With the US Federal Reserve’s monetary taps fully opened, the US dollar weakened significantly, providing a welcome boost to emerging markets and commodity prices.

With technology stocks proving to be clear pandemic winners, it was no surprise to see Asia lead the gains. China, along with the tech-heavy markets of South Korea and Taiwan, were the top performers.

The Australian equity market ended the period down 11.6 per cent in AUD terms (S&P/ASX All Ords), lagging the global index in the rebound and over the year due in part to a smaller index exposure to the large cap growth stocks, particularly in tech, that have driven global equity returns.

Overall, Australia has weathered the impact of COVID-19 relatively well compared to most other advanced economies. Tourism and travel were hit hard by the lack of international travellers as well as state border closures. However retail spending remained strong, supported by a large fiscal stimulus package. Chinese demand for iron ore has proved resilient, although other commodity export volumes have been affected by political friction. 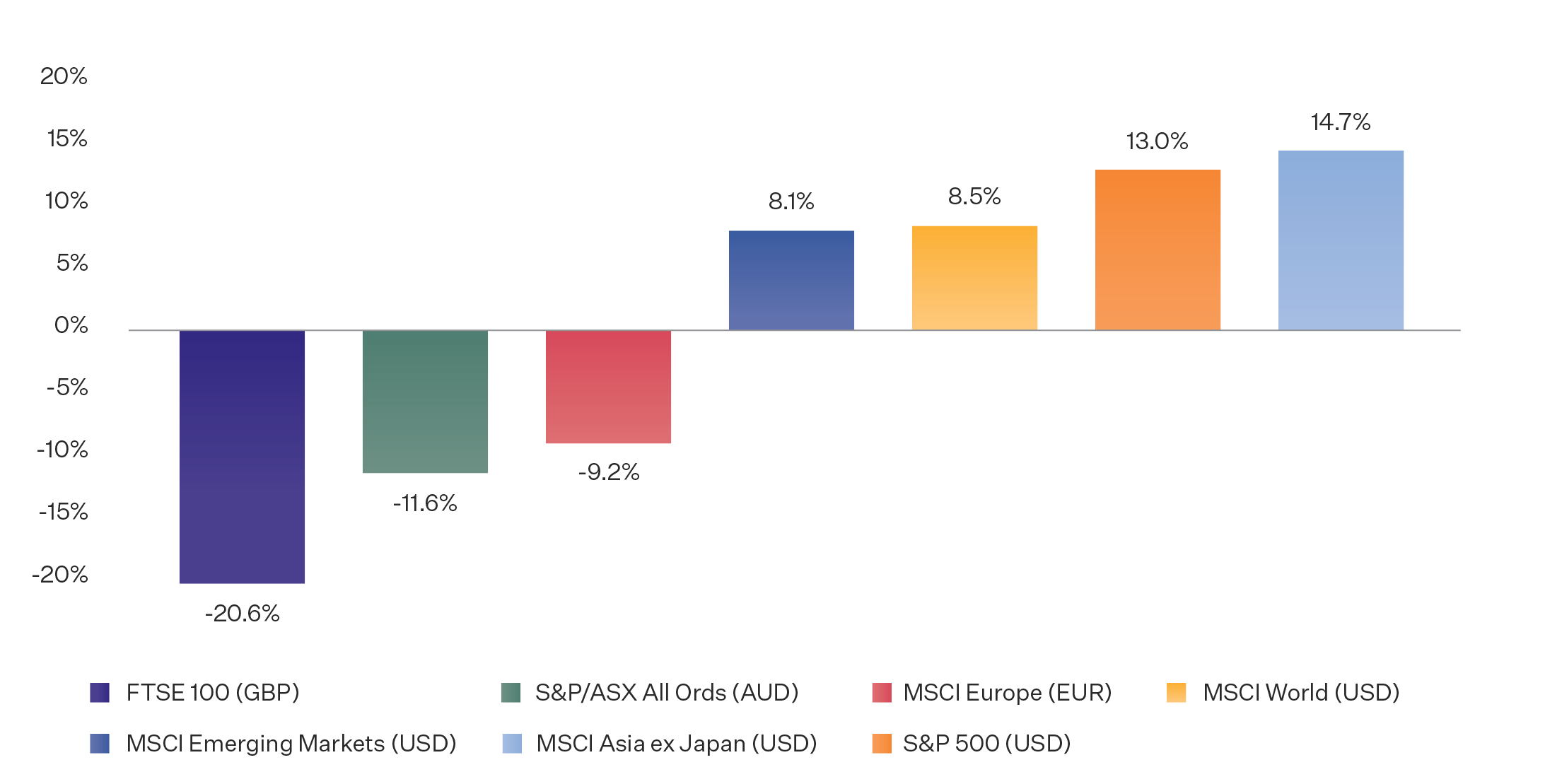